Posted on July 4, 2013 by admin| Comments Off on New Views on Gegharot’s East Citadel 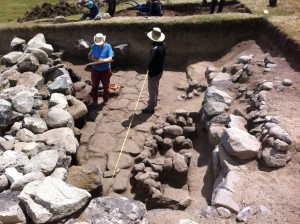 An unfinished operation on Gegharot’s East Citadel has already yielded interesting results.  In an area not far from the East Citadel shrine that we documented in 2011 we have opened a paved stone floor dating to the Late Bronze Age.  Adjacent to the floor were three surviving (and possibly two other unpreserved) curvilinear stone-lined features.   The floor and features were later covered during the site’s first destruction episode.  A new wall was then subsequently built atop the destruction debris.

Ethnographic analogies traditionally hold that narrow paved galleries such as the one we’ve uncovered served as pens for young animals.  The small adjacent basins would then make sense as feeding troughs.  What is perhaps most interesting about such a reconstruction is the room’s proximity to the shrine.  Did young animals figure prominently in the ritual practices of the shrine?  We are hoping that expanded excavations and faunal analysis might shed some light on the question.