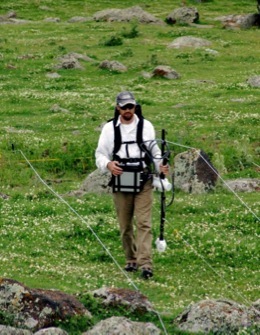 During the summer of 2008, Ian Lindsay completed a 3.25 hectare magnetic gradiometry survey of the settlement area on the southern and eastern portions of the Tsaghkahovit site. The survey was accomplished using a GSM-19W Overhauser gradiometer from GEM Systems (see photo at right). The instrument was cycling at a rate of 0.5 seconds with transects spaced at 50cm.  The survey was followed up by a series of three 2x2m test trenches to verify interesting magnetic anomalies associated with detected architectural remains.

The goal of the survey was to establish how extensive and intensive construction and occupation at the site was during the mid-2nd millennium BC.  The gradiometry data helped define the spatial configurations of below ground buildings as consisting of small rooms clustered around larger common spaces, while simultaneously expanding the known boundaries of the lower town. In addition, an exploratory magnetic survey on the east side of the fortified hill (East Terrace survey area) alerted us to what may be a processional stairway leading up to a series of terraced spaces at the base of the fortress, which may us in identifying the lower entrance to the fortress.

In the South Lower Town survey area, the gradiometry data revealed the layout of several round articulated structures that we interpret as a residential complex, likely denoting the continuation of subsurface constructions initially revealed in the South Lower Town in the 2005 excavations.  This, in combination with LBA constructions discovered in the South Settlement survey area, support the hypothesis that a sizeable population had settled at the base of Tsaghkahovit fortress; however, relatively thin, single-floor occupation layers exposed during follow-up test excavations also suggest that the structures may not have been as enduring as the fortresses that oversaw them, perhaps occupied seasonally by transhumant pastoralists.  If further data supports these initial interpretations, we could be looking at a situation where sedentary political authorities faced the prospect of legitimizing their right to rule over communities that continued to practice mobile pastoralism.

Results of the 2008 survey are published in the journal Archaeological Prospection 17(1):15-27.

A second season of magnetic survey was carried out in the summer of 2010 by Conner Wiktorowicz, a graduate student at Purdue University.  Conner surveyed 2 ha along the lower northern slope of Tsaghkahovit to determine the presence of LBA domestic architecture on this side of the fortress.  Conner then surveyed another 2 ha on the north and northwest sides of the Gegharot hill prospecting for signs of domestic spaces along the gradual northern slope of the site.  The presence or absence of extensive habitation at Gegharot would help contextualize the ritual and productive characteristics of the site.  The northern slope is one that we had the least information about from surface remains, so presented a likely target for geophysical prospection.  The second hectare surveyed was on the northwestern side of Gegharot aimed at further establishing the layout of terrace architecture downslope from those currently undergoing excavation.  Results of the 2010 survey formed the basis of Conner’s MS thesis.