Current archaeological chronologies across much of the South Caucasus and eastern Anatolia have been limited by a relative paucity of reliable radiocarbon determinations. Project ArAGATS has been working over the last decade to help augment the available data by creating sizable radiocarbon datasets for the sites in the Tsaghkahovit Plain and facilitating dates for other sites from across Armenia. These dates currently comprise the largest corpus of absolute dates for the South Caucasus and have provided the foundations for significant re-estimations of several key phases of South Caucasian (pre)history.  For the most part, Project ArAGATS’s samples have been run by the AMS laboratory at the University of Arizona and calibrated using the most recent versions of OxCal calibration software.

Since 2010, Project ArAGATS has collaborated with the The Malcolm and Carolyn Wiener Laboratory for Aegean and Near Eastern Dendrochronology at Cornell University to extend Dendrochronological analysis into the Caucasus region.  At present, well-preserved burned beams from destruction levels of Late Bronze Age Gegharot are undergoing analysis using precision radiocarbon dating and wiggle-matching techniques to refine the dating of the site.

The ongoing investigations of the Early Bronze Age levels at Gegharot have necessitated a broad reconsideration of the traditional chronology of the Kura-Araxes horizon in the region.  While the dates from the earliest “Elar-Aragats” phase accord quite well with the emerging consensus on the formationof the Kura-Araxes artifactual repertoire sometime in the second half of the 4th millennium B.C., the association of the very well-preserved “Karnut-Shengavit” occupation layers with early 3rd millennium B.C. C-14 dates presented a challenge.  While traditionally “Karnut-Shengavit” style  ceramics had been placed at the end of a tripartite Kura-Araxes sequence in which “Elar-Aragats” materials were followed by “Shresh-Mokhrablur” ceramics, our results suggest that the “Karnut-Shengavit” wares were in fact at least partially contemporaneous with “Shresh-Mokhrablur” settlements.  This would indicate that the “Karnut-Shengavit” ceramic style is not just a temporal phase of the Kuras-Araxes but more specifically a regional variant.  More details on this issue can be found in both the preliminary report forthcoming in Eurasia Antiqua and in the forthcoming Project ArAGATS volume I. 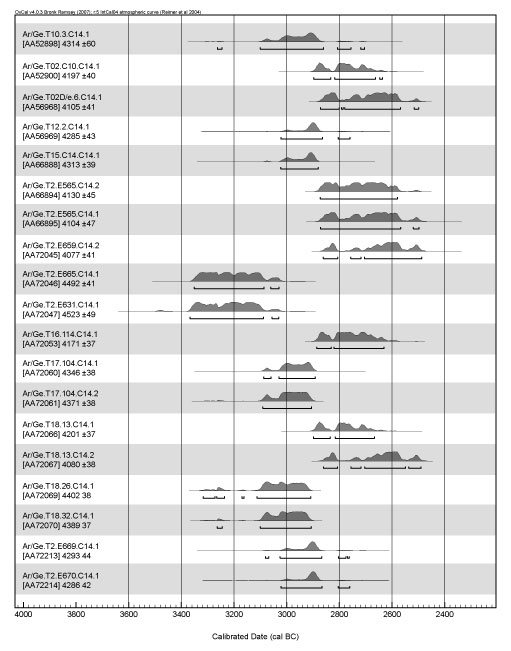 Radiocarbon determinations from both Gegharot and Tsaghkahovit Fortresses have greatly assisted in pinning down the absolute chronology for the end of the Middle Bronze Age and the subdivisions in the Late Bronze Age material sequence (an effort greatly assisted by the multiple LBA destruction levels at Gegharot.  For more details on the LBA sequence, see the forthcoming Project ArAGATS volume I. 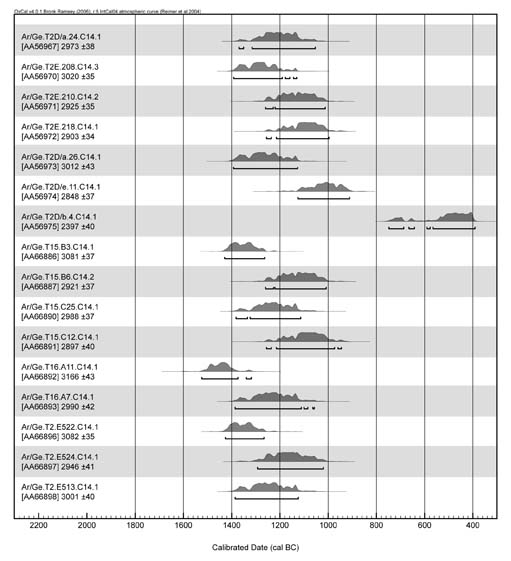 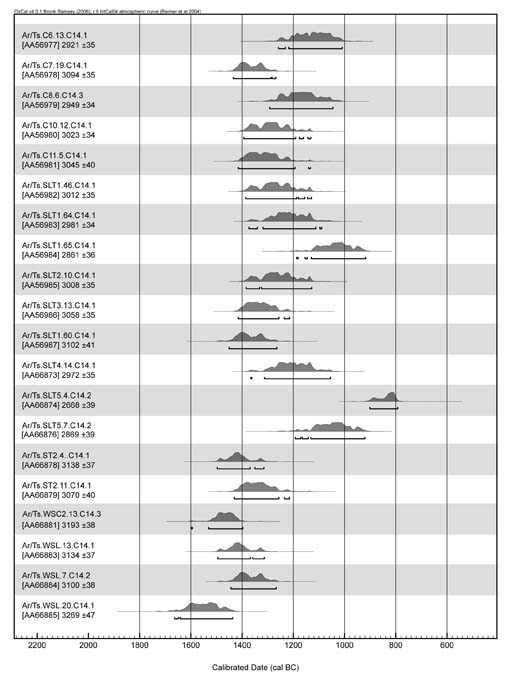 Radiocarbon dating meets a considerable challenge in the mid-first millennium B.C. due to problems in the calibration curve which stretch one and two sigma probability intervals across as much as 4 centuries.  Yet further excavationo at sites like Tsaghkahovit, alongside research from other sites producing viable samples for wiggle matching, now afford the hope of greater accuracy. 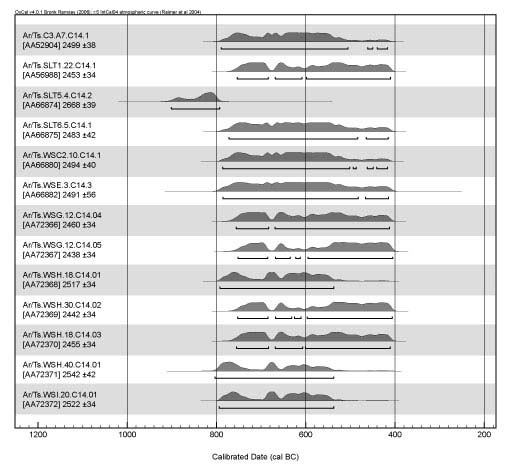