The 2013 field season marked our 10th season of fieldwork in the Tsaghkahovit Plain and the 15th anniversary of Project ArAGATS.  Fieldwork focused on the fortress of Gegharot, its adjacent kurgan cemetery, and the Iron 3 town of Tsaghkahovit.

An update on the 2013 season will be posted here in the coming weeks. In the meantime, the 2013 season was the first that we blogged throughout.  So the home page provides the blog entries that we reported from the field. 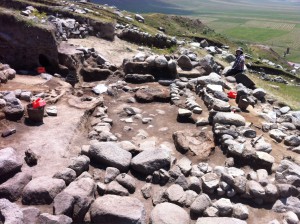 Armine Harutyunyan and the 3 EB hearths of T30.