The 2010 field investigations of Project ArAGATS were dedicated toward continuing to detail the forces that drove the emergence of the first complex socio-political regimes in southern Caucasia through excavations at the fortress sites of Gegharot and Tsaghkahovit in central Armenia.

The 2010 investigations at the multi-component site of Gegharot had two primary research priorities. First, remote sensing techniques (magnetometry and ground penetrating radar [GPR]) were employed to provide an extensive view of the site, including subsurface features. We also worked with colleagues from the Armenian Institute of Geology to conduct pilot investigations in the application of GPR to archaeological research in the Caucasus.  The second research priority was to excavate trenches laid across the West Terrace, in the Western and Eastern Citadels, and in the extramural area north of the citadel, to ground-truth results from the magnetometry survey. The excavations provided new information about the practices and institutions that forged political authority in the Late Bronze Age (LBA), and also uncovered extensive evidence of the site’s Early Bronze Age (EBA) occupation.

A highlight of the season was in opening T27 on the Eastern Citadel, where we found the partial remains of a large storage room. In this room, pithoi were uncovered in situ in the floor, along with an assemblage of cups, bowls, serving vessels and bronze projectile points. The materials had been sealed by a thick destruction layer, including the remains of numerous well-preserved burnt beams that are being examined at Cornell’s Dendrochronology Laboratory.

There were two main goals for the 2010 season: first, a magnetometry survey was conducted on the north slope of the fortified hill, and excavations were conducted in the South Lower Town residential complex. The new operations, SLT 9, 10, and 11, were laid to the south of the 2008 excavations and uncovered new information about LBA domestic economies. In particular, new functional variability was uncovered in the form of a special storage facility in SLT 9 where the floor was riddled with pits both large and small (see image below).  In SLT 10, we also distinguished the presence of multiple thin LBA floor levels, suggesting the occupation of the residential complex may have been seasonal rather than year-round. 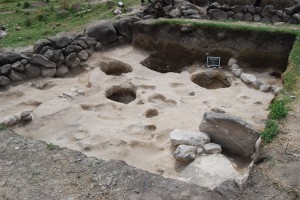 Overview of storage pits in SLT 9

The 2010 research at Tsaghkahovit continued to closely examine the materiality of social and political life in this semi-subterranean settlement of the Achaemenid Persian Empire. We resumed our investigations of the site’s main complex (Precinct A) by completing the excavation of Room I begun in 2006 and branching out into the unexplored northeasterly area of the complex (Room N). This season we also launched excavations of the room blocks at the immediate base of the fortress in an effort to begin to discern lines of social difference within the Iron 3 community. We thus targeted two adjacent rooms in this sector of the site (WSAC and WSAD), which proved both contemporaneous with Precinct A and quite similar in overall architectural configuration.

The highlights of the season were fragments of two distinctive red-burnished amphorae, found near a large hearth in the central room of the complex (Room I).  The vessels carry relief decorations of leaping quadrupeds on their handles, which in the case of one of the vessels, doubles as a spout.  Both vessels are similar in form and concept to numerous provenance and unprovenanced metal amphorae with animal handles dated to the Achaemenid period. Quite remarkably, the most secure parallels for these vessels are the zoomorphic-handled amphorae that the Armenian and Lydian delegates carry on the Apadana relief at Persepolis. 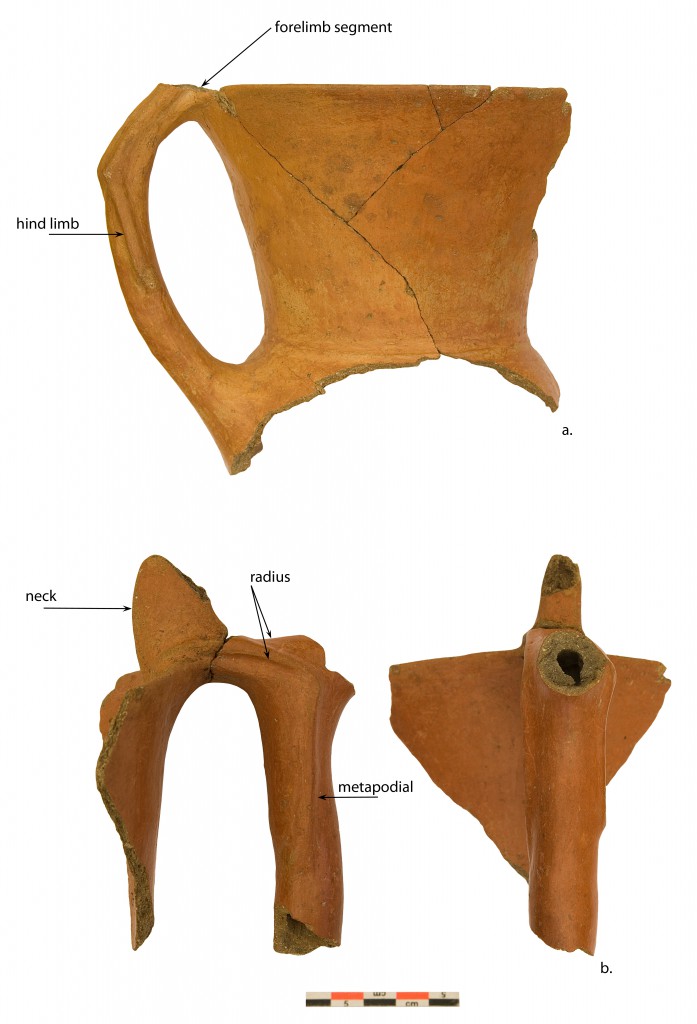