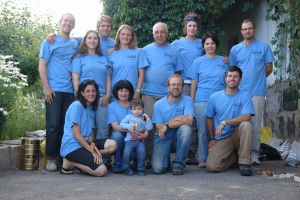 The 2011 Field Season of Project ArAGATS followed closely on the research priorities that shaped the 2010 season. For our investigations of the emergence of complex societies during the Late Bronze Age, this meant continued excavations across the citadel and terrace precincts at Gegharot and in old and new areas of the settlement at the base of Tsaghkahovit. For the Iron 3 research program, the expansion into new areas of the Achaemenid-era town uncovered new evidence of a large and dynamic occupation.

A full report on the 2008, 2010, and 2011 field seasons is now forthcoming from Archaeologische Mitteillungen aus Iran und Turan. 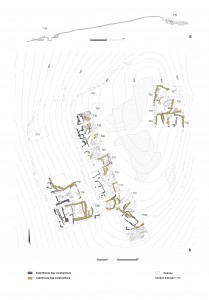 Excavations at Gegharot in 2011 focused on three primary areas of the site: the west terrace, the west citadel, and the east citadel.  The east citadel proved particularly compelling as we continued excavations in an area that had yielded an extensive collection of storage jars in 2010.  In expanding the excavation area, we came upon a platform and an array of features and materials that suggest the area was in fact a shrine–the third that we have documented at the site.  This east citadel shrine was impeccably preserved thanks to a terminal fire at the site.  The artifacts from within the shrines all testify to extensive practices of divination—efforts to discern the future through various portents. 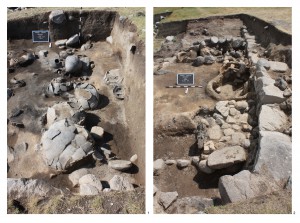 Collections of river cobbles indicate lithomancy; caches of striated and burned astragali (primarily from the left side of the animal) testify to the throwing of bones.  And storage areas filled with the remains of wine, wheat, and cuts of meat indicate the provisioning of ritual specialists by the surrounding communities. 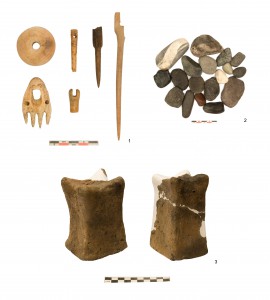 The 2011 investigations in the LBA residential complex focused on an eastern expansion of our work in 2010 to further expose the articulation of rooms and their functional variability through two 6×7 m operations (SLT 13 and 14). The architecture and material culture recovered in these operations confirm our earlier impressions about this sector of the Tsaghkahovit occupation, that (a) several of the original LBA rooms were reoccupied during the Iron 3 period (further evidenced by a small Iron 3 grave discovered between rooms), and (b)  residential patterns in the LBA were characterized by seasonal site use rather than permanent settlement, at least for a segment of the community. These latest operations also help clarify how LBA builders prepared the bedrock surface for wall construction, and uncovered a special-use, semisubterranean room in SLT 13 with tantalizing evidence for possible pottery production (see photo below). 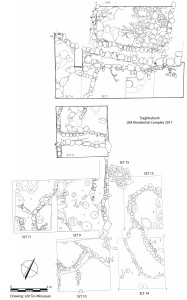 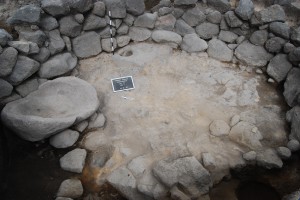 The 2011 excavations at Tsaghkahovit continued to investigate the materiality of social and political life in this rural settlement of the Achaemenid Persian Empire. Work in the main complex of the settlement (Precinct A) concentrated on completing Room N begun in 2010 and excavating part of one of the complex’s largest rooms (Room M) in order to gain a firmer understanding of traffic flows and social variability among rooms. We also continued the investigations of the sector of the site that lies at the immediate base of the fortress, and particularly a single large room, Room AC, begun in 2010. 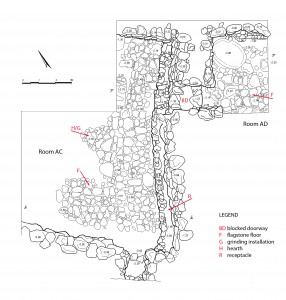 The room was marked by a flagstone floor that covered much of the interior, along with a receptacle running parallel to one wall of the room. Toward the center was a cooking and grinding installation. In the soil samples collected from this area, project archaeobotanist Roman Hovsepyan identified the first evidence of cultivated grape (a single pip) in the Iron 3 town.

As with 2010, the excavations of Room AC revealed distinctive ceramic vessels that are stylistically derived from Achaemenid metal forms. 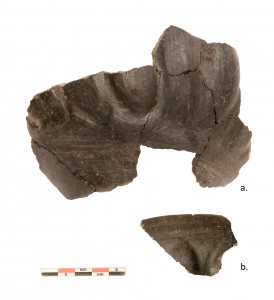 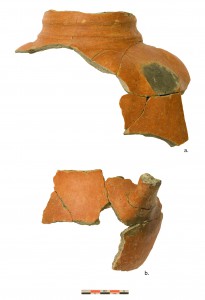