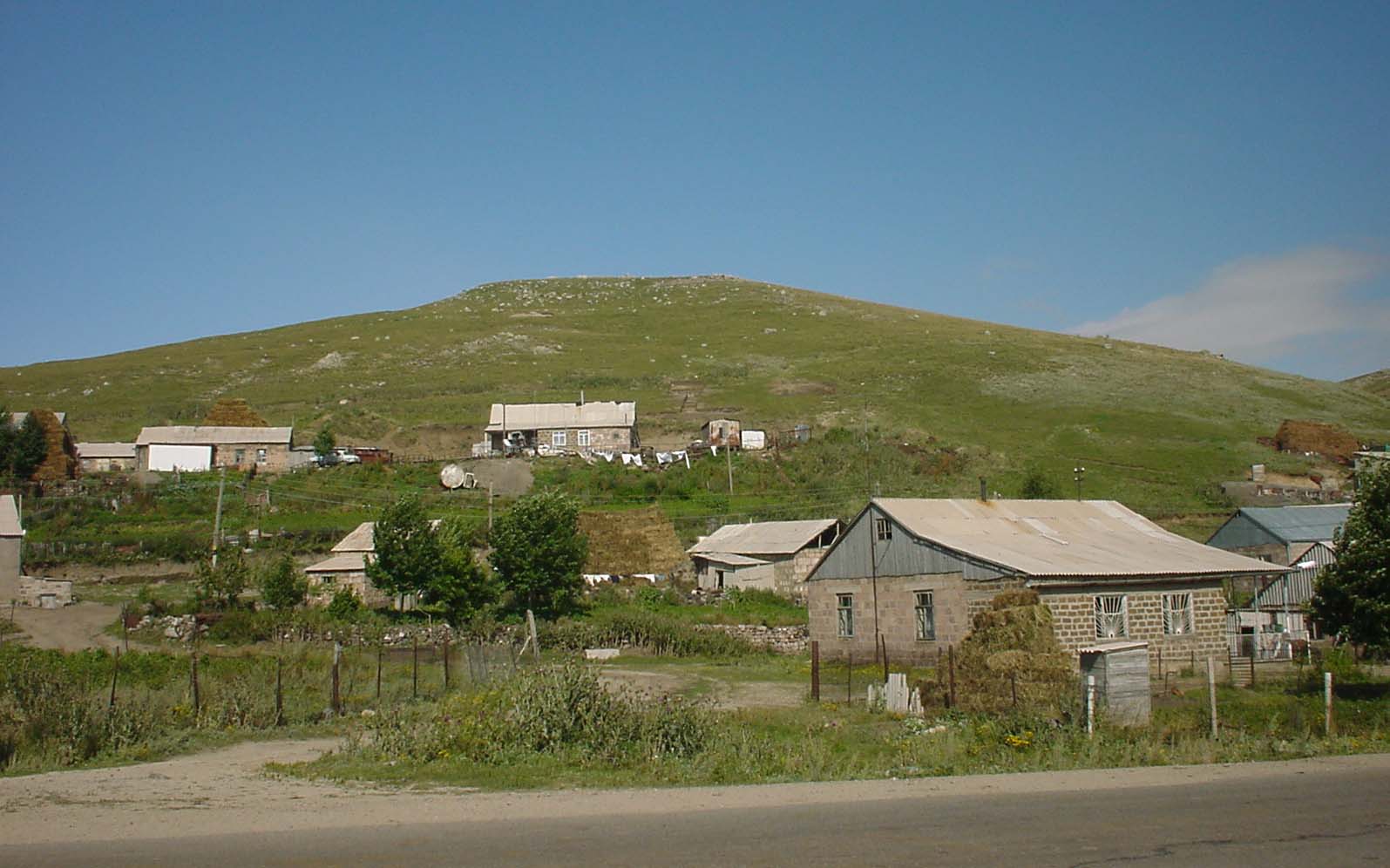 The fortress of Gegharot lies on a spur of Mt. Tsilkar on the eastern outskirts of the village, 700 m northeast of the Kasak River. The site (as defined by the surface materials) covers an area of approximately 3.43 ha, but the fortification walls circumscribe only the 0.36 ha citadel. The citadel is highly eroded, with weathered bedrock visible at a number of places. Only the top course of the fortification walls is visible from the surface, so little can be said regarding the masonry employed in their construction. The layout of the walls suggests the presence of a gateway on the northwest side of the site

The archaeological complex at Gegharot was first identified by Martirosyan who recorded scatters of Early Bronze Age surface materials, a cyclopean fortress, and a cemetery (Martirosyan 1964: 23). However, only the cemetery became a focus for more intensive research. In 1956, Martirosyan (1964: 89-93) excavated five Late Bronze Age burials and in 1960, Esayan investigated three more.

The surface remains recovered from Gegharot included a large corpus of fragmentary ceramics indicating occupations dating to the Early and Late Bronze Ages as well as to the Iron 3 period.  Initial test excavations conducted in 2000 recorded well-preserved Early and Late Bronze living floors, as well as a series of destruction episodes that led us to expand our investigations at the site in 2002 and 2003.  In 2005 and 2006, Gegharot became the primary object of the ArAGATS investigations.

Excavations at Gegharot Fortress, like those at Tsaghkahovit, were initially directed toward understanding the forces driving the initial emergence of socio-political complexity during the Late Bronze Age.  With the discovery of a large, well-preserved Early Bronze Age village at the site, our analytical objectives grew to encompass an examination of the dynamics of Kura-Araxes settlement.

The Early Bronze Age village at Gegharot appears to have been established on the summit and upper terrace of the hill and subsequently expanded onto the lower western slope. The growth of the Kura-Araxes horizon village suggests a late fourth and early third millennium occupation at the site of some duration, perhaps, as noted above, interrupted by at least one hiatus. Nevertheless, it is clear from the stratigraphy of the site, the material assemblages, and the available radiocarbondeterminations that the Early Bronze Age village at Gegharot was occupied during two phases of the Kura-Araxes horizon: an early occupation beginning in the latter half of the fourth millennium B.C. (ca. 3500/3350-2900 B.C.) defined by an Elar-Aragats material assemblage and a later occupation from the early third millennium B.C. (ca. 2900-2700 B.C.) marked by a Karnut-Shengavit assemblage. 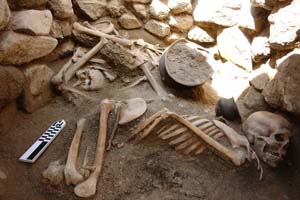 The tomb was a square stone crypt, 1.2 m long, 1.0 m wide, and 0.95 m deep with an entryway, ordromos, 60 cm high and 50 cm wide in the southern wall.  Inside the tomb were the remains of three individuals. The bones of two individuals had been pushed into a pile against the northern wall and the skulls of both were found in the northwestern corner. A large bowl was found between the two skulls. The skeleton of the third individual was found fully articulated on the floor of the chamber. The skeleton lay on its left side, with its head to the east, facing the doorway to the south. The artifact inventory of the burial included 4 ceramic vessels and 79 cylindrical and discoidal beads made of white paste.

remarkably complete in situassemblage of early Kura-Araxes material culture. Amongst the large quantity of distinctive finds from the southern room of the complex were carbonized seeds, a simple hearth, a single andiron, and extensive ceramic assemblages, but also contained a single bronze spearpoint on the floor.

The north room contained evidence of a quite sizable conflagration and an artifactual repertoire that included a decorated hearth, a deep pit cut into the floor filled with discarded ceramics, 13 flint sickle blades still articulated in the distinctive half moon shape of three sickles, and a large obsidian spearhead.

The ceramic assemblages from the T17-T18 room complex included primarily red and brown wares characteristic of the early Kura-Araxes Elar-Aragats group. The extensive evidence of burning across the complex suggests that this initial Early Bronze occupation was terminated by a significant fire.

As a result of the rapid abandonment of the building, the inventory of the rooms is marked by an exceptional diversity of artifacts (in terms of both material and function) related to an array of social practices that shaped daily life for the early Kura-Araxes era inhabitants of Gegharot

One of the most intriguing questions that now has been pressed upon us is not only the nature of Late Bronze Age occupations at Gegharot and Tsakahovit fortresses and the socio-political institutions that occupied these enigmatic complexes, but also the strange silence in the region that seems to have followed the destruction of Tsakahovit. While the destruction of Tsakahovit was undoubtedly a watershed event in the political history of 2nd millennium Transcaucasia, it is unclear as to why the region appears to have been so thoroughly abandoned for some 700 years until village life returns during the Achaemenid period. At present we think that by understanding the nature of Late Bronze Age life at Tsakahovit and Gegharot—and the cultural, political and economic forces that contributed to its destruction—we might come closer to also understanding the reasons behind the region’s abandonment. The violent nature of the final conclusion of Tsakahovit’s Late Bronze Age occupation suggests not only that the site holds considerable potential to answer key historical and archaeological questions regarding the rise of early polities in 2nd millennium B.C. Transcaucasia, but also that it holds considerable potential to grip the broader public imagination as the charred remains of the fortress reflect a turbulent and troubling moment in the history of the region.