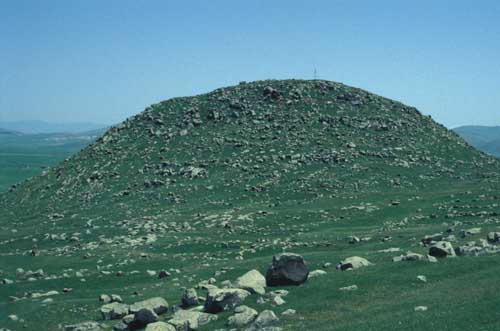 Tsaghkahovit is located on the leading edge of a spur of Mt. Aragats directly overlooking the southern edge of the plain.  The site extends across 39.6 ha, including the fortress outcrop, secondary ridge to the southeast, and two flanking basins  The fortress hill (7.59 ha), identified on some maps as Kalachi Tepe, rises 80 m above the plain in a conical outcrop capped by a flat citadel (0.59 ha).  Surrounding the citadel is a stone fortification wall in generally good condition.  The fortification wall appears to have been constructed atop a stone foundation or revetment which itself rested on bedrock.  The wall seems to have been constructed of variable medium and small-sized facing stones on both sides of a rubble core.  The facing stones were moderately worked to give a flat surface on both the interior and exterior faces.  Several buttresses punctuate the exterior wall face. 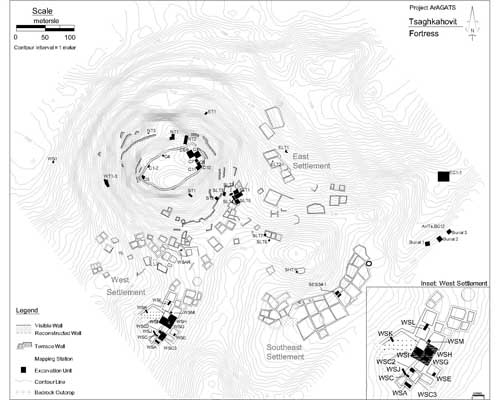 In 1998 Project ArAGATS conducted test excavations Tsaghkahovit that revealed occupations at the fortress dated to the Late Bronze Age II. Excavations continued in 2000, and 2002-2003. These investigations revealed remains from two major periods of occupation—the Late Bronze Age and Middle Iron Age (Achaemenid period). The stratigraphy of the citadel is generally rather straightforward with three superimposed primary occupation levels marked by both distinct architectural complexes and material culture assemblages. The uppermost building level dates to the early and developed Medieval periods of the 5th-14th centuries A.D. Materials from this period have been found across the citadel but the constructions of this era appear to be rather ephemeral, consisting primarily of basalt blocks set in irregular lines. 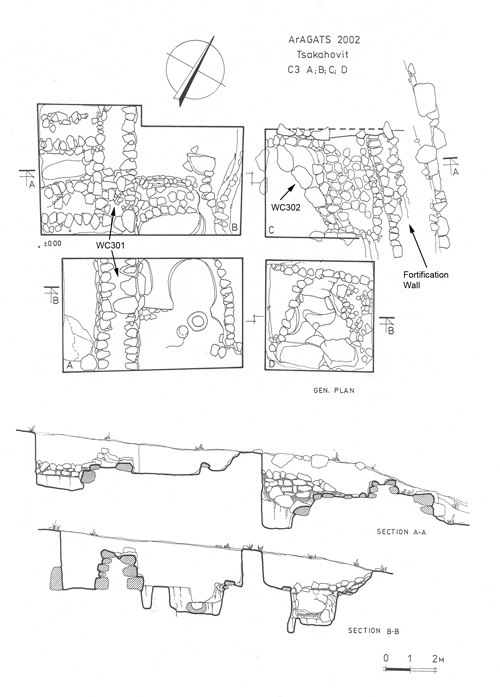 The most robust remains on the eastern citadel date to the mid-first millennium B.C. and are contemporary with the site’s extensive Middle Iron Age lower town. Set on prepared bedrock foundations, the lowest occupation level on the citadel was constructed during the Late Bronze Age. The Late Bronze Age levels at the site are particularly well-preserved on the terraces of the site, where there appears to have been little subsequent reoccupation. Significant portions of Late Bronze Age architecture remain well-preserved on the citadel as well, and the vast majority of the material assemblages from the citadel date to this period. The weight of evidence, including the extant radiocarbon determinations, indicates that the fortress walls (WC301, WC601, and WC1001) were constructed during the Late Bronze Age, suggesting the presence of an authoritative political institution able to draw on considerable wealth, skill, and labor. However, the subsequent Middle Iron constructions on the citadel appear to have dug into preceding levels and reused Late Bronze Age walls. As a result, despite the remarkable assemblages and architecture from the mid-second millennium B.C., there are few well-preserved contexts.

In 2005 and 2006, work on the citadel was discontinued as the focus of investigation shifted to detailing the Late Bronze and Middle Iron Age lower towns. 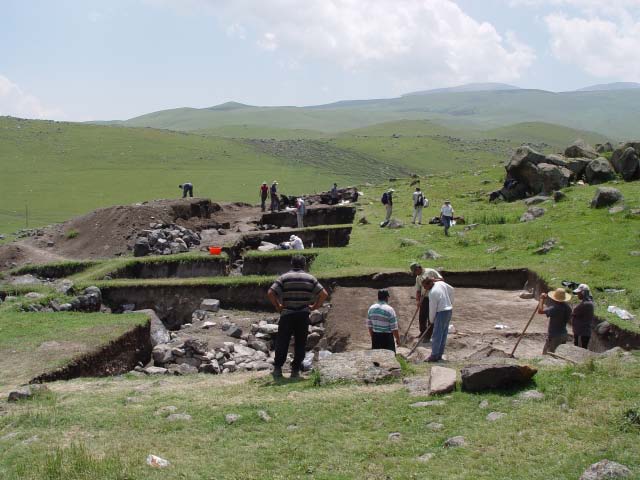