Since 2005, Lori Khatchadourian has been conducting excavations of the mid-first millennium BC settlement at Tsaghkahovit. This research, described in various project reports and in Khatchadourian’s 2008 dissertation, is investigating the ways in which everyday material and spatial practices in this one town of the Achaemenid Persian Empire (ca. 550-330 BC) contributed to the making of imperial hegemony. The work adopts a diachronic approach to the study of communities under empire, attending equally to the lifeways of subjects in the imperial “present” (in this case, the Iron 3 period) as to the social and political traditions of a conquered group’s pre-imperial past (the Late Bronze and Urartian periods). Such historical depth makes it possible to discern the complex ways in which subjects of empire combine their local traditions with the foreign social institutions of a new imperial order in perpetuating the relations of power that constitute empire.

Khatchadourian’s excavations have focused most intensively on an area of the site termed Precinct A (also described as the West Settlement), a 22-room semi-subterranean complex located to the south of the fortress that appears to have been the center of local authority during the Iron 3 period (see Tsaghkahovit plan).   The complex is conspicuously 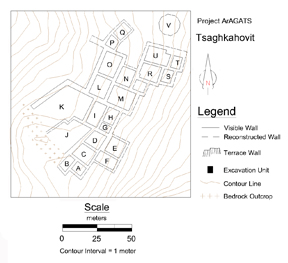 compact and condensed compared to the other units and clusters of rooms to its north.  In 2005, eight test trenches were excavated in various rooms of this complex (C, E, J, K, L, M) in order to verify that the units of Precinct A were contemporary with one another and datable to the mid-first millennium BC. Following on the sampling strategy of 2005, in 2006 and 2008 excavations aimed at broader exposures within the complex and thus targeted two rooms in their entirety (H, G) and substantial portions of others (C, D, I).  The data from the excavations of this single-occupation complex, as well as those from the citadel, have allowed for the preliminary study of transformations in the constitution of political authority and social life from the Late Bronze Age to the Iron 3 period. This work has sought to integrate the LBA and Iron 3 components of Project ArAGATS’s research into a diachronic study of the spatialization and materialization of political authority and inequality at Tsaghkahovit. 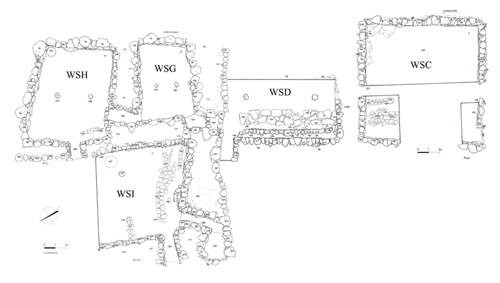 To summarize the main findings of the research to date, the Project ArAGATS surveyhad shown that following a 500 year hiatus in occupation of the Tsaghkahovit plain that began with the destruction of the LBA fortress polities (ca. 1150 BC), returning communities of the Iron 3 period gravitated with unmistakable regularity to the dilapidated remains of the abandoned prehistoric fortresses. The acute predisposition to 6 of the 10 LBA fortresses signals the endurance of pre-existing socio-political institutions that preserved certain spatial practices (namely, the hilltop fortress) as essential to the laying down of new roots.

However, subsequent research in Precinct A is demonstrating that the relationship between the LBA past and an Achaemenid-era present is not reducible to a mere mimicking of old traditions. During the Iron 3 era, the fortress was an enduring, but not a fixed and immutable institution of social life.  Results of the excavations in Precinct A tentatively suggest that even as the fortress remained a meaning-laden place, it lost its practical status as the prime spatial location for the everyday practices that reproduced authority.

Several lines of evidence attest to the importance of Precinct A within the Iron 3 settlement and its centrality for certain material practices that reproduced Achaemenid hegemony.  Particularly salient have been the findings from two rooms of the complex—rooms G and H. In room G, a remarkable collection of artifacts found in situ on the floor of the room—including a ceramic stand, basalt mortar, and serpentine

plate—appear to be linked to a specific Achaemenid ritual that is only sketchily understood from evidence from the empire’s capitals.  Chemical and mineralogical analyses of the plate trace its origins to the Zagros regions.

Similarly, the assemblage of remains from the floor of room H were linked to feasting activities that were inflected with distinctly Achaemenid overtones based on diagnostic artifact forms. 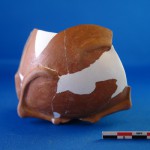 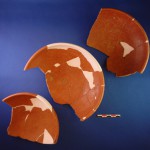 Taken together, the evidence that is emerging from the excavations of Iron 3 Tsaghkahovit suggest that Achaemenid hegemony in this one town of the empire was sustained through routine spatial and material practices that modified and recombined local past traditions of the highlands (linked to the fortress institution) with those of the Achaemenid present. These investigations will continue in future seasons.