In the 2006 Project ArAGATS field season, Maureen Marshall began conducting systematic excavations at the cemetery southeast of the Tsaghkahovit fortress. The cemetery, Burial Cluster 12, formerly East Cemetery 1, consists of three clusters of cromlech constructions built on the lower slopes of a narrow east-west oriented valley. The goal of the excavations are to better understand Late Bronze Age social and political life, both through the investigation of mortuary practices, as well as bioarchaeological analyses of the deceased individuals, and to contextualize the Tsaghkahovit cemetery within the changing burial practices of the 2nd millennium B.C. in the Southern Caucasus. 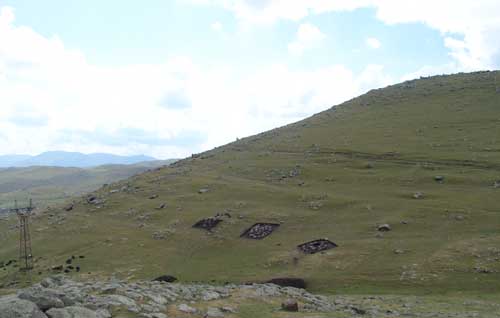 Maureen’s bioarchaeological project utilizes an osteobiographic approach in order to investigate several basic questions, including who were they and what did they do? The project thus examines how people interacted in the Tsaghkahovit Plain and beyond through movement and residential patterns by carrying out strontium isotope analysis. Through comparison of the strontium levels in teeth and bone it is possible to find out if an individual spent the last year of their life in the same place as which they were a child when their teeth were forming. Additional lines of investigation include analysis of health through observations of pathology, stress, and wear. Understanding people’s behaviors in life and how they changed over time allows a better understanding of socio-political processes of change in the Bronze Age. 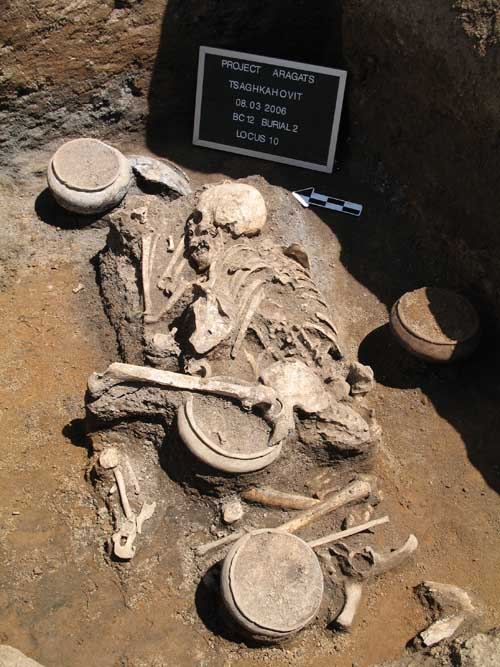 Project ArAGATS first carried out excavations in BC12 in 1998 with the excavation of an oval shaped cromlech burial on the northeastern slope. The excavations revealed two stratigraphically superimposed constructions with cist chambers, one of which contained only vessels, while the second also contained partial skeletal remains (long bones and crania). The 2006 investigations uncovered four cromlech burials. The first cromlech was a spiral design construction and did not contain any human remains or cultural materials and may be interpreted as a cenotaph. The second and third cromlechs each contained a single articulated individual and several vessels. Two articulated individuals, one with a bone toggle pin, were buried in the fourth cromlech. In 2008, an additional 4 cromlech tombs and one overlapping “bud” chamber were excavated on the facing slope.  These tombs were all stone lined cists and ranged from fully articulated interments to the interment of select disarticulated remains. The tombs, associated materials, and human remains were analyzed and published in Marshall’s dissertation.

In 2015,  we returned to the Tsaghkahovit burial cluster and excavations continued on the northern slope of TsBC12, an area with densely packed tombs and apparent terracing walls that divide the tombs. In order to investigate temporal-spatial and architectural variation suggested by the 2006 and 2008 excavations, we opened a large trench, approximately 182m2 , that encompassed a terrace wall, four complete circular cromlechs and 1 rectangular cist north-east of (or upslope from) the terrace wall, and one complete cromlech south-west of (or downslope from) the terrace wall. The excavations shed light on the spatial and architectural relationship between the tombs and terrace wall, revealed a variety of sub-surface and surface architecture between neighboring tombs, and produced the skeletal remains of four individuals, which though preliminary are already shifting our perspective on the demography of the population interred at TsBC12. Analyses are currently underway that will shed greater light on the temporal-spatial relationships between the burials and on the lived experiences of the interred individuals.