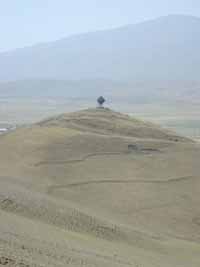 The fortress of Aragatsi Berd lies along the eastern margin of the Tsaghkahovit Plain, at the intersection of the modern Yerevan-Spitak road (M3) that traverses the Pambak pass, and the Sipan (Pamb-Kurdskii) canyon road that traverses the Spitak pass. Surface architecture and ceramics were first observed at Aragatsiberd in the late 1990s during the Project ArAGATS survey of the Pambak foothills. Like many other fortresses established during the Bronze Age in southern Caucasia, the site features at least 5 successive descending terraces on its northern slope and at least 1 broad terrace on its southern slope. These terraces provide level occupation space on the steep surface area of the upper outcrop.

The volume of surface materials collected from Aragatsi Berd during the ArAGATS survey was quite high relative to the Tsaghkahovit Plain’s similarly sized sites such as Berdidosh or Tsilkar, a result of modern construction activity on the summit as well as intense Bronze Age occupation. Despite Soviet-era damage to the site, several segments of stone masonry walls were visible from the surface, along with a significant concentration of ceramic debris. 60 sherds were classifiable into three periods of occupation: the Early Bronze Age (18 sherds, 21% of the total), the Late Bronze/Iron 1 period (34 sherds, 40%), and the Iron 3 period (8 sherds, 10%).

The first test excavations at Aragatsiberd, 4m x 4m operation AB1, were conducted on the northern terrace of the site during the 2006 excavation season. The purpose of this test trench was to identify well-preserved Late Bronze Age fortress levels outside of the Tsagkahovit / Gegharot binary dynamic, a significant third perspective on regional patterns in the ceramic economy and the Late Bronze Age occupation of the plain more generally. These excavations revealed a rich and well-preserved stratum of Late Bronze Age ceramic, bone, and lithic artifacts, as well as an LBA room floor and abandonment deposit. 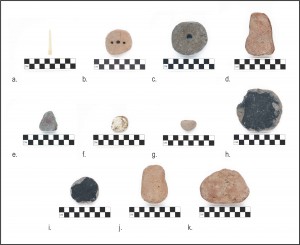 Materials deposited in operation AB1 associated with the LBA abandonment of the site.

This conspicuous deposit was located beneath a large boulder near the center of AB1 and surrounded by a collection of cow astragali. Artifacts under the boulder consisted of two sherds from an LBA manghal vessel, two ceramic discs, several stone polishing tools, two spindle whorls, and a bone pin.

Excavations in 2008 exposed additional Early and Late Bronze materials on both the northern and southern fortress terraces. On the northern terraces, work revealed LBA room floors and terracing architecture, including two additional abandonment deposits. In operation AB2, the deposit consisted of articulated cattle spine and extremity portions recovered from a 1.75m-diameter pit . A stratified deposit in AB3 featured a bronze ring, broken-in-place manghal vessel, awl, spindle, and set of cow astragali deposited atop the pavement sealing a 1.25m-diameter pit. Near the bast of the pit, 1.5m in total depth, an LBA jewelry mold was recovered. In its design forms and size the mold most closely resembles the mold recovered from operation T-15 in the Gegharot citadel, although it appears to be made of argillite, not the bluish granite of the T-15 mold. 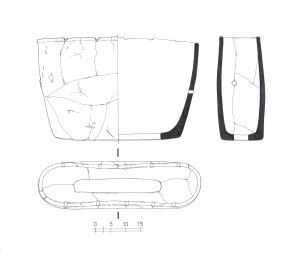 On the southern terraces, excavations revealed additional LB carved floors and terracing architecture featuring numerous pits and repaving episodes. Radiocarbon dates suggest that the LBA occupation of this southern sector continued later than that of the northern. It is also distinguished from the northern terraces by its superimposition above deep EBA cultural deposits, including a wide variety of decorated pottery types and zoomorphic andiron fragments. Future excavations will pursue these intriguing indications of Aragatsi Berd’s earliest inhabitants lower in the stratigraphic column. 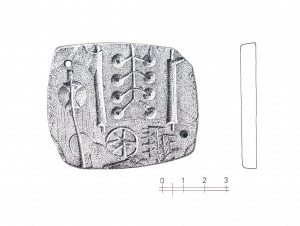 LBA jewelry mold recovered from the pit in the northern half of operation AB3.

The archaeological site of Aragatsi Berd is listed as Armenian Commission for the Preservation of Historical Monuments site number 701.2.