This season marks the 20th anniversary of Project ArAGATS, and our research continues apace, both in the field and in the lab. With support from the National Science Foundation, Cornell University, and the Institute of Archaeology and Ethnography of the Republic of Armenia, we are continuing our investigations into Bronze Age societies of the Tsaghkahovit Plain and the Kazakh River Valley, with a particular focus on the site of Gegharot and Aparaniberd.

This year marks the 14th season of excavations at the Bronze Age site of Gegharot. We continued our investigations of the Early Bronze Age settlement on the site’s northwestern slope, expanding the multi-phase (EB1 and EB2) complex of T39 (under the supervision of Armine Harutyunyan) to expose the totality of its stratified semi-circular constructions and multiple hearth features. New trenches in other areas of Gegharot’s western and northwestern slopes, excavated by Cornell graduate students Gabby Borenstein and Annapaola Passerini, were placed to “ground-truth” intriguing anomalies detected in previous seasons through GPR and magnetometry survey. Preliminary results of this season’s excavations point to the first evidence of Late Bronze Age settlement activity off of the citadel, marked by a well-built terrance wall and associated rectilinear space containing multiple pits (T44). Ongoing magnetometry survey conducted by Arshaluys Mkrdichyan  in two grids (totaling 1,500 sq m.) sought to further explore the extent of settlement activity on the northwestern slope, to the west of T39 and north of T44. 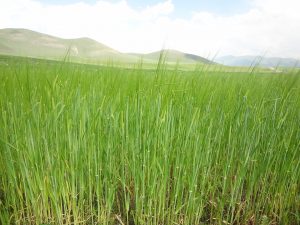 Fig. 1: A field of hulled two-rowed barley (Hordeum vulgare subsp. distichon convar. distichon) on the eastern side of Gegharot. As today, this plant was the main cultigen and source for staple food in the Early and Late Bronze Age. (courtesy of Roman Hovsepyan)

Archaeobotanical analysis resumed in 2018. Dr. Roman Hovsepyan processed seed materials from the 2017 and 2018 excavations at Gegharot. In general, soil samples collected from the trenches on the western slope of the site have yielded considerably fewer archaeocarpological materials compared to the Gegharot summit, where thousands of seeds were recovered each season. But the quantities are nevertheless broadly comparable to other Bronze Age sites in the region, and samples collected from pits and fireplaces revealed moderately large quantities of plant remains. Dr. Hovsepyan’s ongoing research is investigating the anthropological and taphonomic factors that might explain the quantitative discrepancies across the site. As on the summit, bread wheat, hulled barley and emmer remain the staple food sources for the western slope of the Gegharot settlement. Also abundant in the sample are seeds of weeds that still grow in the area today, judging by comparative analysis with a herbarium containing dried plants from nearby fields.

Archaeobotanical and charcoal analysis undertaken during the 2018 field season also included analysis of the multi-period site of Aparani Berd, excavated from 2015 – 2017. This season Amy Cromartie conducted primary analysis on Early and Late Bronze Age contexts at the site, including carbonized materials from an LBA pit. The results will help shed light on the climate, agricultural practices, and wood acquisition strategies during the Bronze Age, and the ways in which Aparani Berd’s inhabitants interacted with their changing environment. 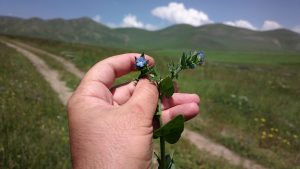 Osteological analysis of human remains was conducted during the 2018 season by Dr. Maureen Marshall. Analysis focused on the remains excavated at Aparani Berd Burial Cluster 3 in 2016 and 2017 as part of the Kasakh Valley Archaeological Survey. In total, the population includes 17 individuals from the Early Bronze Age, Late Bronze Age, and Iron I Period. These individuals are predominately female and sub-adults, a portion of the Bronze and Iron Age populations that has been under-represented in the tombs previously excavated by Project ArAGATS. Bioarchaeological analysis of the remains and mortuary practices is thus revealing new information about lived experience during these periods and will contribute to the project’s investigation of violence and political development in the ancient past.

In 2018, zoo archaeological analysis conducted by Dr. Belinda Monahan focused on fauna from the 2016 and 2017 excavations of T38 and T39 at Gegharot, as well as the animal bones from settlement and mortuary contexts at Aparani Berd (Burial Cluster 3), which were excavated in those those same two seasons.