On August 23, Alan Greene successfully defended his PhD Dissertation at the University of Chicago entitled: “The Social Lives of Pottery on the Plain of Flowers: An Archaeology of Pottery Production, Distribution, and Consumption in the Late Bronze Age South Caucasus”.  The abstract to the dissertation is below the photo.

Alan’s is the third Project ArAGATS dissertation to be successfully defended.  Congratulations to Dr. Greene from the whole ArAGATS team! 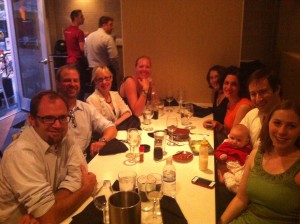 Archaeological accounts of the political economies of emergent complex polities consistently rely on models of commodity redistribution, particularly that of foodstuffs, made possible by the privileged position of powerful sovereigns. Such a specific depiction of the “economic” side of political economy leaves little room for the conception of ancient publicity as established through accumulations of individual material transactions occurring in a variety of meaningful social contexts. This dissertation follows the production of mass political subjectivity through alternative political-economic avenues among the earliest complex polities in southern Caucasia, specifically those of northwestern Armenia and the Tsaghkahovit Plain (Plain of Flowers), during the Late Bronze Age (LBA), ca. 1500–1150 B.C. It is argued that the LBA political economy in the Tsaghkahovit Plain depended on the politically authorizing and subjectivizing practices of a rather disparate population of corporate sub-groups in semi-public contexts, practices which incorporated ceramic containers and equipment during rituals, feasts, productive acts, and transactions of prestation and tribute.

By relying on a biographical conception of economic life as opposed to formalist, substantivist, or subsistence-based models of socioeconomic and biological reproduction, the dissertation discusses how pottery produced at several loci around the LBA plain was distributed between local fortresses, necropolises, hilltop shrines, and workshops—both as containers of agropastoral goods offered to hilltop “total-institutions” and empty ceramic commodities—where textiles and metal adornments appear to have been rather essential craftmaking foci. In forging a “critical archaeometry,” the author presents the results of the visual, compositional, and structural analysis of a pottery collection derived from new excavations at the site of Aragatsi Berd, as well as the previously excavated sites of Gegharot and Tsaghkahovit. The study presents an analysis of the particular chains of transactions in the economy of ceramic containers and equipment as they were arranged during a period in which essential political forms of significant social inequality were institutionalized into local and regional political vocabularies of the everyday. It pursues the social lives of individual containers, equipment, and manghal pyrotechnical items as they traced rather specific and regular trajectories in spite of their differentiation across what appear to have been several different sociotechnical regimes of production. Multiple new methods for the assemblage-based, non-destructive analysis of archaeological pottery, developed specifically to analyze the pottery collections relevant to this investigation, are also outlined.