The investigations of Project ArAGATS in the Tsaghkahovit Plain have defined the broad contours of regional occupation during four major eras of settlement prior to the crystallization of the modern landscape.

The hiatuses between these occupational eras are also quite intriguing as they speak to broad trends in regional (pre)history.  At present these local phases of occupation are integrated into the overall regional chronology as described in the table below. 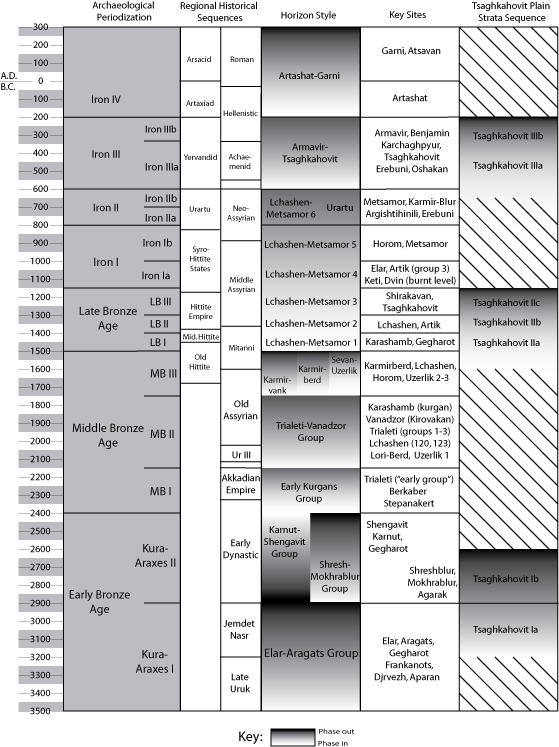 Our investigations have been principally guided by an overarching effort to describe the emergence, and re-formulation, of social and political institutions in the region. This concern with institutional formation initially arose from an abiding interest in the unique constellations of authority that forwarded the emergence of early complex polities in southern Caucasia at the beginning of the Late Bronze Age.

However, these concerns soon broadened to envelope both the constitutive practices of Early Bronze Age village life and the remarkable political re-structurings attendant to the virtually unknown world of post-Urartian towns. Even as we continue to develop a sense of the specific institutions that shaped social, economic, and political life over three millennia in the Tsaghkahovit plain, it is clear that authority in the region was produced within a shifting landscape dominated by the distinctive built environments of the village, the fortress, and the town.

We have conducted an extensive series of radiocarbon determinations focused on the region’s Bronze and Iron Age occupations which are discussed further on the Radiocarbon and Dendrochronology page.